WASHINGTON (AP) — President Donald Trump named a former pharmaceutical executive to lead his administration’s all-out effort to produce and distribute a coronavirus vaccine by the end of the year.

Slaoui is to serve in a volunteer capacity, and will be assisted by Army Gen. Gustave Perna, the commander of United States Army Materiel Command.

The move comes as the president and White House aides hope to produce vaccines for the coronavirus faster than what many scientists believe is realistic. 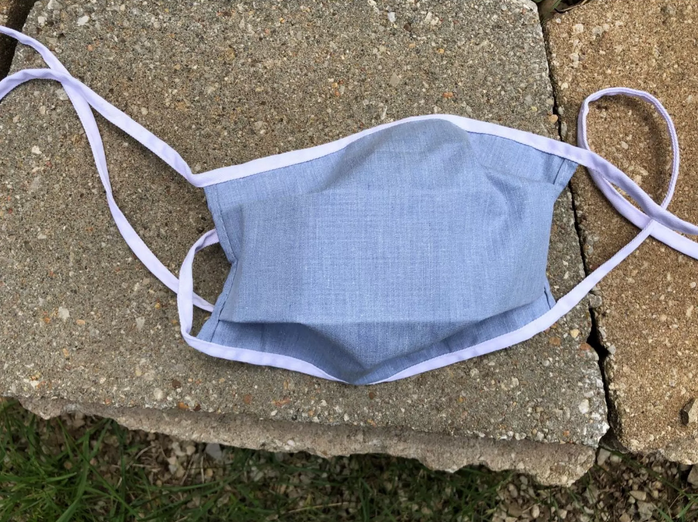 LAWRENCE, Kansas — In his 15 years as a corrections officer at a northeast Kansas prison, David Carter witnessed stabbings, worked through riots and broke up more fights than he can count. He was used to risky situations.

When the coronavirus pandemic showed up, Carter and his coworkers at the Lansing Correctional Facility still touched other people and countless surfaces all day, every day: putting on and taking off handcuffs, opening doors and working multiple buildings in the same day or week.

Stress levels at one of the state’s largest and oldest prisons were rising. The staff needed to work longer hours because people had been laid off earlier in the year. Carter had been exposed to the virus outside of work, and twice self-isolated as a precaution, but a human resources employee told him he had to come to work the second time because he didn’t have symptoms.

“You can’t fit that many people under that roof and keep them distanced in any way, shape or form,” he said.

Carter could no longer justify the risk of bringing the virus home to his family, so he quit on April 28 in public fashion, posting his resignation letter on Facebook and talking to media outlets.

“We all saw the writing on the wall a couple of months ago,” Carter said. “Every senior staff looked at each other and said, ‘You know what? If this thing shows up in our prison, everybody’s got it. There’s no way around it.’”

Since March 31, 790 of about 10,000 inmates and 97 staffers have tested positive for COVID-19, which has been found in seven of the state’s facilities (of which there are nine adult prisons and one juvenile prison). At Lansing, 44% of prisoners tested positive, and three inmates and two corrections officers have died.

Knowing how quickly the virus can spread inside close quarters, the American Civil Liberties Union of Kansas tried and lost a lawsuit in which they wanted the state to release about 55% of prisoners.

Under usual circumstances, prisons are dangerous and understaffed, which can lead officers to consider quitting. And during the pandemic, four current or former officers told the Kansas News Service, the state hasn’t done enough to protect them and acted too late to contain it.

The Kansas Department of Corrections issued updated guidelines in early April regarding the use of personal protective equipment and the screening of inmates and employees who enter any prison. It has tested all of the inmates at Lansing and begun testing inmates at the Wichita Work Release Facility, and announced that it would give fabric masks to all inmates and employees in early April.

“We will continue to review our practices and improve those whenever and wherever possible,” agency secretary Jeff Zmuda said this week. He announced the agency will also begin testing all of its staff.

The department has also started giving $200 per week to employees working in prisons with positive COVID-19 cases, although workers are only eligible if they don’t take any time off during each week.

Lansing is the state’s most affected facility. As of May 13, 750 out of 1,699 people who are incarcerated there have tested positive for COVID-19. Most are asymptomatic. Three of those people have died. Among staffers at the prison in Leavenworth County, 88 have tested positive, and two died this week.

The department said Thursday it would move all inmates from the Wichita facility to Lansing after finding 38 positive cases in Wichita, almost all of which are asymptomatic.

A corrections officer at Lansing, who spoke with the Kansas News Service on the condition of anonymity because of the risk of retaliation, brings in cleaning supplies and hand sanitizer to share with coworkers because the prison doesn’t provide enough.

Some coworkers, the corrections officer said, have had trouble finding child care because daycares won’t take the children of Lansing employees anymore.

“What are they going to do when everybody catches it … and nobody wants to come to work?” the officer said. “They have put us on the back burner for so long.”

In mid-April, the DOC announced it would be giving masks to all staff and inmates. But the officer said employees had to ask directly for masks, rather than receiving them as a group. The officer asked a nurse for one, but a nurse said she had been instructed not to provide masks to staff.

The officers also have been told they will face disciplinary action if they bring in outside masks, said the officer, who uses masks obtained from a local dentist rather than the ones distributed by the state.

“I feel a mask is a mask, and right now that’s basically all we have to protect us,” the officer said.

The Lansing officer also said that for two weeks at the end of April, no laundry was being done — not even the inmates’ masks — because prisoners were being moved to new buildings that didn’t have working laundry facilities. Currently, the officer said, laundry and food carts aren’t sanitized, even though they move between the two buildings where inmates are staying.

For weeks, criminal justice advocates in Kansas have raised questions and asked for solutions for the potentially unsafe conditions in state prisons during the pandemic. In March, some public defenders sent a letter to Gov. Laura Kelly asking her to release prisoners to reduce virus transmission — both in prisons and in the homes and communities where employees live.

“This is a public safety, a public health concern,” public defender Jennifer Roth, who signed the letter, told the Kansas News Service.

The state released six people on house arrest, but does not plan to release any more, Zmuda said.

At the same time, ACLU unsuccessfully sued to force the state to release people who were convicted of minor crimes, had a short amount of time left on their sentences or were vulnerable due to age or illness.

"We are definitely disappointed for our clients who continue to face dangerous and declining conditions inside Lansing,” executive director Nadine Johnson said in an emailed statement. “KDOC's efforts clearly are not enough to protect the people they have a legal obligation to keep safe.”

There are only six known cases in the Topeka Correctional Facility, the state’s only women’s prison. But officers there still fear for their lives and safety — as well as their families’ well being, corrections officer Jon-Wesley O’Hara said.

“Most of us do not have any way to isolate from our families if it happens,” he said. “When it comes, we'll bring it home and we're going to have to figure out how to live with ourselves.”

O’Hara said it’s helped that new inmates are quarantined when they arrive at the Topeka prison. But many inmates don’t wear their masks, he said, and it’s impossible to keep people from congregating the yard during recreation periods.

In the day rooms, the phones for inmate use are clustered within a few feet of each other.

“If you want to have contact with people on the outside,” O’Hara said, “you’re going to have to deal with people that are not six feet away from you.There’s just no way around that.”

More staff at the Topeka women’s prison are staying home due to illness, childcare issues or self-isolation, O’Hara said. And several members of the prison’s crisis-response team were temporarily transferred to Lansing.

The short-staffing has led to more officers working overtime in Topeka. Some of his coworkers have cancelled vacations because they don’t have enough paid time off to self-quarantine for two weeks following travel to high-risk areas.

Like Lansing, Topeka corrections officers often move between multiple buildings in the same shift, which increases the risk of transmission between units. That’s according to Cody Hill, another corrections officer at the Topeka facility.

The prison has required social distancing in the medication line, Hill said. But education programs still go on in crowded classrooms. While the building has decreased chow-hall occupancy during meal times, he said, people still sit fairly close to each other for breakfast and dinner.

Hill said inmates have been bringing trays back to their dorms for lunch, where they sleep close enough to touch. Starting Monday, inmates will bring all of their meals to their dorms, corrections spokesperson Rebecca Witte said in an email.

Hill hasn’t considered quitting, though. He thinks his work is important and doesn’t want to take the risk of being unemployed during a recession. But he feels the Department of Corrections has communicated poorly with staff.

“We don’t proactively plan for things,” Hill said, “and it really shows whenever we come to a crisis like this.”

Nomin Ujiyediin reports on criminal justice and social welfare for the Kansas News Service. You can email her at [email protected] and follow her on Twitter @NominUJ.