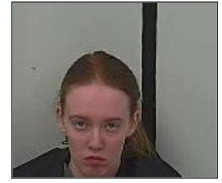 OSKALOOSA, Kan. (AP) — A Kansas woman has been sentenced to life in prison for her role in the 2018 shooting death of her mother's boyfriend.

Ashlyn Hemmerling was sentenced after pleading guilty to first-degree murder last year in the March 2018 shooting death of 22-year-old Taylor Dean Sawyer, of Lawrence, in a remote area of Perry Lake, according to Jefferson County Attorney Josh Ney.

Hemmering's boyfriend, 23-year-old Jonathan Blevins, was sentenced last year to life in prison with no chance of a parole for 50 years. Authorities said previously Hemmerling helped plan the shooting, which likely involved a domestic dispute and drug use.