STONE COUNTY— One person died in an accident just after 3:30p.m. Monday in Stone County.

Hand was pronounced dead at the scene and transported to Stumpff Funeral Home. Duvall was not transported for treatment. Hand was not wearing a seat belt, according to the MSHP. 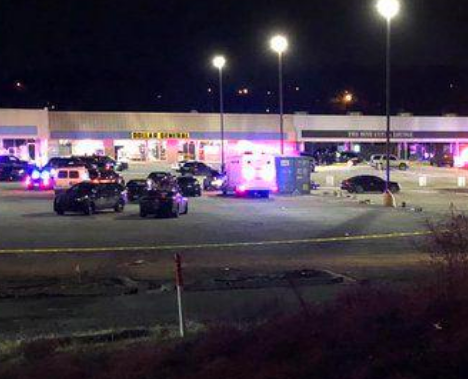 Police on the scene of the shooting photo courtesy KCTV

KANSAS CITY (AP) — A gunman who opened fire outside of a Kansas City nightclub, killing a woman and injuring at least 15 other people before a guard killed him, had a past weapons charge dropped after lawmakers loosened the state's gun laws.

Jahron Swift, 29, had been in trouble with the law before he opened fire on people leaving or waiting to get into the 9ine Ultra Lounge in eastern Kansas City late Sunday, when the city was celebrating the win that put the Kansas City Chiefs in the Super Bowl.

Swift was sentenced to probation for an August 2015 traffic stop in which he was caught with cocaine and a .45-caliber semi-automatic handgun, court documents say. Jackson County Prosecutor Jean Peters Baker said Tuesday that Swift was charged in August 2016 with a concealed weapon violation, which might have led to a probation violation that could have landed him a short stint behind bars or more probation. But the following month, Missouri's Republican-led Legislature overrode Democratic Gov. Jay Nixon's veto to pass sweeping gun legislation that allowed most adults to carry concealed weapons without needing a permit.

“I have really thought about what is comparable," Baker told The Associated Press. “The only comparable I can think of is prohibition. All those whiskey charges that were pending in 1932, prosecutors couldn't carry them anymore."

Baker, who opposed the changes to the state's gun laws, said prosecutors had to “dismiss a slew of cases," including Swift's. Baker said Swift also faced a robbery charge in 2013 that prosecutors couldn't get past the preliminary hearing stage because of problems getting victims to cooperate.

“We had the double whammy of non-cooperative victims and the law change later down the road," she said. “What I used to love about these gun charges is you had police as your witnesses. We do struggle with witnesses. Then the law change took those charges away from us.”

Police were trying to determine a motive for this weekend's attack, and it wasn't known if Swift knew any of the victims, including the 25-year-old Kansas City woman who was killed, Raeven Parks. Authorities haven't said how many of the injured had been shot, but three of them were in critical condition.

A cousin of Parks, Tamela Smith, told television station KSHB that Parks had been texting family and was leaving the club when she was shot.

“She was walking out, and just walked into the midst of it,” said Smith, who described her cousin as a “beautiful, beautiful woman.”

In a Facebook post, the club's owners described the shooting as a “shameless and senseless act of violence” and said they had “little in the way of answers."

The shooting led to quick calls by some to shutter the club permanently. Only about a week ago, there was a drive-by shooting in the parking long, and police had received complaints about the club in the past, said police Chief Richard Smith, who has no known relation to Tamela Smith.

Mayor Quinton Lucas said city officials would soon review whether the nightclub could be considered a nuisance, which might lead to its license being temporarily revoked, The Kansas City Star reported.

Just before Sunday's shooting, officers drove through the parking lot and saw nothing suspicious, the police chief said Monday. A disturbance occurred in the line to get into the club shortly before the shooting, but it wasn't clear if the suspect was involved in that confrontation, he said. The security guard, who is licensed to be a guard but is not an off-duty officer, heard the disturbance from inside the bar and went outside and confronted the shooter, Smith said. Police officers didn't fire any shots at the scene. The guard's name hasn't been released.

Police recovered multiple guns at the scene, all of which were believed to be the suspect’s.

Kansas City has one of the highest homicide rates in the U.S., and the rate rose last year despite it dropping in many other major cities.

“We've got a problem in Kansas City,” Lucas said Monday. “We've said a few times that it is an epidemic of gun violence. We're losing too many lives, we had too many shot each year. We will remain committed, both at City Hall and the police department, and every agency in Kansas City is making sure that we stop this problem.”

Chief Smith said the shooting happened despite having extra officers and increased security across the region because of the AFC Championship game, which attracted visitors from across the country.

The shooter outside 9ine Ultra Lounge was identified as 29-year-old Jahron Swift of Kansas City, Missouri, according to Chief of Police Richard Smith during a Monday news conference.  A private security guard shot and killed him.

The victim was identified as Raeven A. Parks, 25, Kansas City.

Police did not fire any shots. The only shots fired were from the security guard and the suspect, according to Smith.

In addition, 15 people were injured and transported to area hospitals, according to Smith. He did not have details on the extent of the injuries.

Police are also still working to determine the motive for the shooting, according to Smith.

The venue was hosting a celebration of the Kansas City Chiefs win to earn a trip to the Super Bowl.

KANSAS CITY, Mo. (AP) — An armed security guard may have shot and killed a man suspected of fatally shooting a woman and injuring 15 more people outside a bar in Kansas City, Missouri, police said Monday.

A motive for the attack shortly before midnight Sunday outside 9ine Ultra Lounge was not immediately clear.

Kansas City Police Capt. David Jackson told reporters that responding officers found “a chaotic scene.” A man and a woman were killed and police believe the shooter is the deceased man, Jackson said.

A spokesman said a gunman opened fire on a line of people waiting to enter the bar. The shooter was shot by an armed security guard, police said.

At least 15 went to hospitals with injuries related to the shooting, police said. It's unclear whether all the injured victims suffered gunshot wounds. At least three people are in critical condition, police said.

Also late Sunday, two people were shot to death and at least five were injured in an attack outside a bar in San Antonio, Texas. The suspected gunman was still on the loose Monday, police said.

A Facebook post on 9ine Ultra Lounge's page advertised Sunday night's “Sold Out Sundays” event, which appeared to be a celebration of the Kansas City Chiefs. The Chiefs — featured on the event's artwork — beat the Tennessee Titans on Sunday to advance to the Super Bowl.

“It just put such a tragic end to such a wonderful day in Kansas City,” Jackson County Prosecutor Jean Peters Baker said at the scene, referencing the win. “It's just hard to stand here and talk about this kind of tragedy on really one of the best days Kansas City has had in a long time.”

KANSAS CITY (AP) — Police in Kansas City say at least two people are dead and 15 people were reportedly injured in a shooting outside a bar.

The shooting took place shortly before midnight Sunday, Kansas City police said at the scene. Capt. David Jackson told news outlets at the scene that responding officers found “a chaotic scene” and had to call in help from around the city. A man and a woman were found dead.

Police believe the shooter is the deceased man, Jackson said in a statement. A spokesman said the shooter opened fire on a line of people waiting to enter a bar, but the motive for the shooting wasn't immediately clear. The shooter was shot by an armed security guard, police said.

During the investigation, police heard that people — at least 15 — were showing up to local hospitals with injuries from the shooting. At least three people were in critical condition, police said.

The scene was near U.S. Highway 40. News outlets at the scene identified the bar outside which the shooting took place as 9ine Ultra Lounge. A Facebook post on the club's page advertised Sunday night's “Sold Out Sundays” event, which appeared to be a celebration of the Kansas City Chiefs. The Chiefs — featured on the event's artwork — beat the Tennessee Titans on Sunday to advance to the Super Bowl.

“It just put such a tragic end to such a wonderful day in Kansas City,” Jackson County Prosecutor Jean Peters Baker said at the scene, referencing the win. “It's just hard to stand here and talk about this kind of tragedy on really one of the best days Kansas City has had in a long time.”