TOPEKA — Natalie Zarate entered state custody when she was 11 years old, removed from a physically abusive mother and placed in a group home for foster children.

Now 23, she trembles when she thinks about her time at EmberHope Youthville in Newton.

Physicians placed Zarate on “crazy,” sometimes hallucinatory medications she later learned were unnecessary. She was confined to her room most of the time.

If she acted out, she was sent to the “timeout room,” a small space behind a metal door used to tame kids who were out of control. Sometimes, workers banished her to the timeout room for trying to defend herself from older kids.

“I remember one time being crushed and slammed by five different people,” Zarate said. “I’m 12 years old at the time. I weigh about 97 pounds solid. That’s a lot for a child to have to deal with, just being slammed and tossed around.”

Nickaila Sandate, president and CEO of EmberHope Youthville, said the safety and well-being of children “is at the forefront of everything we do” and that the center takes all reported incidents seriously.

When Zarate left Youthville, she bounced for six years among foster parents and a series of temporary homes within the state’s child welfare system. Zarate, who lives in the Kansas City area, now volunteers with Kansas Appleseed and other child advocacy groups.

“Sharing my story is going to touch the most people,” Zarate said. “They don’t really understand what happens behind closed doors.”

Lawmakers have intensified their interest in addressing the failings of a child welfare system in crisis, and many are frustrated that Democratic Gov. Laura Kelly’s administration hasn’t shown more progress since taking office a year ago.

Kelly said she’s installed a new secretary for the Department for Children and Families and wrangled a funding boost from the Legislature.

“There were just no social workers to do anything on family preservation or anything on reintegration, so kids were going into the foster care system and not able to get out because we just didn’t have the resources,” Kelly said. “The state just wasn’t holding up (its) end of the bargain.”

An investigation by The Topeka Capital-Journal and KCUR highlighted the severe instability in the foster care system. Kansas added thousands of children to the system as the Legislature adopted policies through the Hope Act that reduced aid to poor families. Republican then-Gov. Sam Brownback championed the changes as a way to encourage parents into the workforce and break families from a cycle of government dependency.

But the welfare cuts were followed by a rising foster care caseload and a spike in runaways from the system. At any time, up to 80 children are missing from state custody.

Children on the street can fall prey to human trafficking. The Capital-Journal/KCUR investigation highlighted the case of Hope Zeferjohn, a Topeka native who is one of 13 known cases in which a girl fled state custody, was trafficked for sex and sent to prison for prostitution-related crimes.

Zeferjohn asked Kelly for a pardon, and child advocates have proposed legislation that would offer a path for victims of human trafficking to clear their criminal records.

It’s unclear whether the Legislature will restore food assistance or increase other benefits to low-income families.

“You take what little safety net we’re providing out from underneath them, they crumble — the kids go in the system,” the governor said. “So I hope that the Legislature will recognize that and do what they need to do.”

On Wednesday, Kelly proposed formation of a new Department of Human Services that would streamline services to children and families by combining DCF, the Kansas Department for Aging and Disability Services and the juvenile services division of the Department of Corrections.

Sen. Molly Baumgardner, a Republican from Louisburg, said lawmakers may be willing to invest more in family members who take care of children who are removed from a home instead of placing them in foster care. Currently, the state pays $10 per day to the family member who takes care of the child.

“When a child arrives with what may be just a backpack full of items, $10 a day isn’t enough to make sure that child has clothing and shoes and personal items that they’re going to need and the food they’re going to need,” Baumgardner said. “If the goal through the Hope Act was to keep a child within the family, we have to do more to address what is going to that family member until the issues at home get addressed.”

Kansas Appleseed, which sued the state over the instability of the foster care system, is pursuing legislation that would create an office for an independent child advocate run by appointees from the governor and the Kansas Supreme Court.

The child advocate’s office would monitor the foster care system and look at systemic problems, such as children not being screened quickly, problems with home visits or a lack of mental health services.

“It’s going to take a long time to fix the Kansas foster care system,” said Joey Hentzler, director of advocacy with Kansas Appleseed. "Not one session, not two sessions, but maybe five to 10 years of work.”

The two nonprofit contractors who handle child placement services for the state — Saint Francis Ministries and KVC Kansas — have outlined priorities for the Legislature that focus on prevention efforts through a wide range of programs and services.

Other initiatives include the implementation of juvenile crisis intervention centers and reducing the waitlist for psychiatric residential treatment facilities.

Christie Appelhanz, executive director of the Children's Alliance, said it remains critical that the Legislature adopt the two dozen recommendations made a year ago by the Kansas Child Welfare Task Force.

Some of those ideas, like investing in social workers and participation in the federal Families First Prevention Services Act, already were addressed by the Legislature. Appelhanz said maximizing investments in Family First is a top priority for this session, along with increasing administrative rates for child placement agencies so they, too, can hire more social workers.

“We can’t afford to allocate any more resources to feel-good ideas that have little basis in fact or quantifiable results for children and families,” Appelhanz said. “When the combined knowledge of the experts in the state have come up with a plan, emotional responses should be ignored until we implement that plan.”

Sherman Smith is a reporter for the Topeka Capital-Journal. He’s on Twitter at @sherman_news. 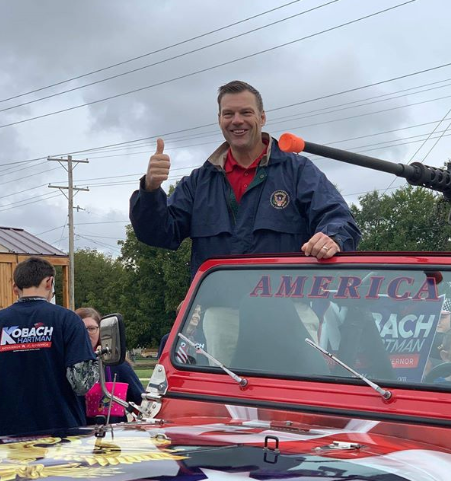 TOPEKA, Kan. (AP) — Secretary of State Mike Pompeo’s declaration Tuesday that he won’t run for Senate in Kansas returned some Republicans to worrying that they can’t block a polarizing conservative from winning the GOP nomination and putting the seat in play.

Pompeo’s decision to remain as the nation’s top diplomat, assuming he sticks by it, means the GOP can’t dodge the issue that had prompted top Republicans to woo Pompeo for months. They saw Pompeo as the best bet for torpedoing hard-right immigration policy advocate Kris Kobach’s bid for the Senate.

The turmoil in the Middle East that preceded Pompeo’s decision could help Kobach with hawkish GOP primary voters. Kobach, the former Kansas secretary of state, has spent two decades building a national profile partly by framing illegal immigration as a national security issue and touting his work with the U.S. Justice Department right after the 9/11 terror attacks.

Some anti-Kobach Republicans focused quickly on the race’s best-funded candidate so far, GOP Rep. Roger Marshall of western Kansas. But he still faced skepticism about his conservative bona fides and whether he can stop Kobach, particularly absent a one-on-one match.

“Everybody but Kobach probably should get together and say, ‘Now why are we doing this and what are we trying to gain?’ And pick somebody and go head-to-head,” said Tim Shallenburger, a former Kansas Republican Party chairman and state treasurer.

Pompeo’s decision complicates GOP efforts to defend their 53-47 Senate majority in November’s elections. The national party and its allies face the prospect of having to put resources into Kansas, even though Republicans haven’t lost a Senate race there since 1932.

Pompeo has said repeatedly that he’d remain secretary of state as long as President Donald Trump will keep him. But his travels to Kansas last year — and comments from Trump — kept buzz about a potential candidacy alive.

He told reporters Tuesday: “I said the same thing yesterday that I’ve said for months. No.”

Fears that a Kobach nomination could put the seat in play arose even as four-term Republican Sen. Pat Roberts, now 83, announced a year ago that he wouldn’t seek re-election. Kobach lost the Kansas governor’s race in 2018 to Democrat Laura Kelly — a contest many in the GOP thought winnable.

The National Republican Senatorial Committee questioned Kobach’s ability to win a general election when he announced his candidacy last summer.

And Scott Reed, the U.S. Chamber of Commerce’s chief political strategist, who ran Bob Dole’s 1996 presidential campaign, said, “We continue to think Kobach is a loser.”

Some Republicans want to winnow the field by urging candidates at the back of the field to drop out. Kelly Arnold, another former state GOP chairman, said if candidates can’t conduct effective fundraising, “it’s time for them to get out.”

Kobach said Tuesday that his independence bothers the Republican establishment — including U.S. Senate Majority Leader Mitch McConnell — and led it to woo Pompeo. His supporters argue that with Trump on the ballot in November, fears of losing the Kansas seat are misplaced.

“We’re seeing a race where conservatives are lining up behind me,” Kobach said.

Kobach also believes his background is an asset with tensions high in the Middle East. At the Justice Department, he helped develop a system that forced more than 80,000 foreign residents to register with the U.S. government so that it could know why they were there for security reasons. Widely derided by civil rights groups, it was abandoned in 2011 by President Barack Obama’s administration.

“Kansans want to know there’s someone with military experience helping to make these decisions,” he said.

But Bob Beatty, a Washburn University of Topeka political scientist, said Kobach has built a reputation among Republicans as “someone who doesn’t back down.”

The leading Democratic candidate is state Sen. Barbara Bollier, a retired Kansas City-area anesthesiologist who made national headlines by switching from the GOP at the end of 2018. She has endorsements from Kelly and former U.S. Health and Human Services Secretary Kathleen Sebelius, a former two-term Democratic governor, and she already is pursuing moderate voters.

Bollier’s campaign announced Tuesday that she’s raised more than $1 million over the past three months — a sizable amount in a low-cost media state like Kansas.

But Marshall began his race with a sizeable balance from his House campaign and entered the final three months of 2019 with nearly $1.9 million in cash. That was twice as much as the combined total of his main GOP rivals, Kobach, Kansas Senate President Susan Wagle and Dave Lindstrom, a Kansas City-area businessman and ex-Kansas City Chiefs professional football player.

The U.S. Chamber helped Marshall win his congressional seat in 2016 by defeating tea party firebrand Rep. Tim Huelskamp. Reed said they’re considering helping him in the Senate race and the “onus is on him” to show he can win the nomination.

Marshall launched his first television ad before Christmas, describing himself as a foe to “Trump haters and their phony impeachment.”

Yet Marshall is hasn’t yet convinced some Republicans. Shallenburger sees his pro-Trump statements as “pandering” and says his ouster of Huelskamp has him perceived as a moderate, despite a conservative voting record.

Kobach is better known and, to some conservatives, just more exciting. University of Kansas political scientist Patrick Miller said Kobach excels “at the theater” of politics, while Marshall seems “vanilla.”

“If central casting called for a generic Republican congressman, that could be Roger Marshall, right?” Miller said. “Someone to just, like, be in the background of the movie shot.”