HAYS – Kansas Speaks Fall 2019, a survey on issues of importance and on the attitudes of Kansans about their state, was released today by the Docking Institute of Public Affairs at Fort Hays State University.

Kansas Speaks is the only regular survey of Kansans on issues and opinions.

Among the questions presented to respondents was the performance of Gov. Laura Kelly, who is finishing up her first year in the governor’s mansion.

“This was the first rating of Gov. Laura Kelly in a Kansas Speaks survey,” said Dr. Brett Zollinger, Docking director and a professor of sociology at Fort Hays State.

“More than half are satisfied with the Governor’s overall performance, the highest satisfaction among the political figures and institutions rated,” he said.

The 2019 survey, conducted by Fort Hays State University’s Docking Institute of Public Affairs and released today, interviewed 352 Kansans by phone (land line and cell). The survey has a 5.2-percent margin of error.

The Docking’s staff and team of Policy Fellows from across the state developed 24 questions in four areas: overall quality of life in Kansas; taxes and the economy; government and politicians; and public policy issues. The series began in 2009.

One hot-button issue covered in this year’s survey was Medicaid expansion. The survey found wide support in Kansas.

“Almost two-thirds – 62 percent – of Kansans support Medicaid expansion,” said Dr. Jian Sun, a professor of political science at FHSU and the Docking’s assistant director. Fifteen percent of survey respondents were neutral on the issue, and 23 percent did not support expansion.

Other questions on Medicaid covered perceived benefits of expansion.

“Over 60 percent agree that Medicaid expansion would help rural Kansas hospitals and agree that those who might obtain health insurance from the expansion deserve this benefit,” said Sun. “Clearly this issue is on the minds of Kansans, as only 22 percent give Medicaid expansion no thought at all as a current political issue.”

Gun control and prisons were among the policy issues addressed.

One question sought respondents’ sentiment on seven gun control issues: Background checks; an assault weapon ban; a ban on high-capacity magazines; preventing sales of firearms to people “who have been reported as dangerous to law enforcement by a mental health provider”; an age requirement of 21 or older to purchase guns; preventing firearms sales to people convicted of violent misdemeanors; and a mandatory three-day waiting period.

Miller is an associate professor of political science at the University of Kansas.

One question also asked respondents to rate the frontrunners in the presidential primary for the Democratic Party.

“Bernie Sanders has the highest positive and highest negative ratings of any Democratic candidate,” said Dr. Michael Smith, Policy Fellow and a professor of political science at Emporia State University.

Two perennial questions on the survey sought the respondents’ attitudes toward Kansas as a place to live and on whether the state is on the right or wrong track.

The full report can be found at www.fhsu.edu/docking/Kansas-Speaks. 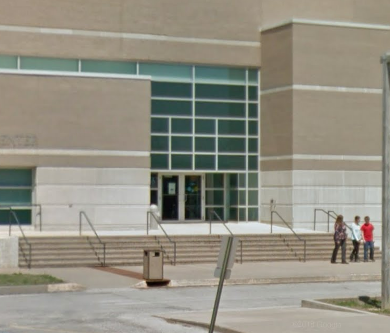 WICHITA, Kan. — A foul-mouthed Kansas judge accused of bigotry and racism who cursed at courthouse employees so often that a trial clerk kept a "swear journal" documenting his obscene outbursts is facing complaints that his conduct violates the central judicial canons of independence, integrity and impartiality.

The Kansas Commission on Judicial Qualifications will next week consider whether Montgomery County Judge F. William Cullins performs his duties with sufficient competence and diligence that he can continue on the bench.

According to a filing, Cullins is accused of mistreating employees; fostering a hostile relationship with the county attorney's office; lacking patience and decorum; exhibiting disdain toward attorneys; and treating some bondsmen with hostility. Other allegations purport he showed bias or prejudice in the courtroom based on race, sex, socioeconomic status or political affiliation, and denied some defendants or their lawyers the right to be heard.

Cullins has acknowledged that he needs "a more effective management style," according to the judicial panel's pretrial order.

Cullins declined to comment to The Associated Press on the upcoming proceedings, referring the call to his attorney, Christopher Joseph, who also declined to comment . Several attorneys and others who practice before the judge either didn't return calls or refused to talk about Cullins' behavior.

Court documents detail instances in which Cullins directed foul, derogatory language at women, as well as specific allegations of racism. In one instance, Cullins was recorded referring to an out-of-state black athlete as "not even a Kansas boy" and telling a black male resident, "you're a Kansas boy" — language that could be considered demeaning to an African American man.

Cullins argued in a filing that this was not a manifestation of racial bias and said the attorney who raised objections has since testified that it appeared no racial connotation was intended.

The judge has acknowledged that he curses frequently and "bitches at people to try to get them to correct their ways."

As his relationship with Montgomery County Attorney Larry Markle deteriorated, Cullins wrote expletives on documents sent to Markle's office and he allegedly belittled the prosecutor before law enforcement officials in open court.

Cullins has acknowledged in court filings that his communications indicate his frustration with Markle's office, but denies that his emotions affected his rulings. He contends that the county attorney's office has failed to file charges in a timely manner against jailed defendants and misused subpoenas.

Markle also declined to comment to The Associated Press on the upcoming proceedings against Cullins or his dealings with the judge.

Cullins was elected in 2006 to the bench in Montgomery County, a mostly rural area dotted by small towns that is home to slightly more than 32,300 people. Cullins served as the county's chief judge from 2015 until last year and remains on the bench. Before his election to the judgeship, he was in private practice for more than a decade and was the city prosecutor for Independence and city attorney for the small community of Cherryvale.

The five-day public hearing is scheduled to start Monday in Topeka, and could feature as many as 37 witnesses and more than 58 exhibits that lay bare the tumultuous justice system in the rural southeast Kansas county.

If the judges and lawyers on the panel find the charges are proven, they can admonish Cullins, issue a cease-and-desist order or recommend the Kansas Supreme Court discipline the judge or require him to retire. Discipline can include public censure, suspension or removal from office.

Three former court employees said Cullins' demeanor contributed to their decisions to quit their jobs. One of them, Lance Carter, was the clerk who kept the swear journal that is now an exhibit.

Cullins argues that his speech is protected by the First Amendment and that his cursing does not diminish his integrity or keep him from performing his judicial duties with impartiality and competence.

Joni Pratt said she left her job as a courthouse clerk for a new position elsewhere at a lower salary. After she resigned, as she walked from the judge's office, Pratt said Cullins "shouted 'yahoo' or 'yippee' (or some similar expression) loud enough for others in the courthouse to hear."

The filings do not identify who filed the original complaints against Cullins, but only those allegations that investigators determined merit further action will be included in the formal proceedings.