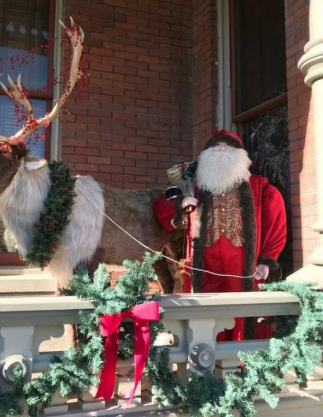 INDEPENDENCE, Mo. (AP) — A Grinch has stolen a large Santa Claus from the porch of a historic mansion in the Kansas City area.

Police in Independence say the jolly old elf was snatched Tuesday or Wednesday from the Vaile Mansion. Built in 1881, the three-story Gothic-like structure is open to the public as a museum.

Police say the Santa belongs to a Parks and Recreation employee and has “much sentimental value.''

In effort to track down leads, police posted pictures showing the missing Santa posed next to a giant reindeer and beside a fireplace.

Several dozen people responded to the post with outrage. One poster predicted that the thief would be ‘’on Santa's naughty list this year.''