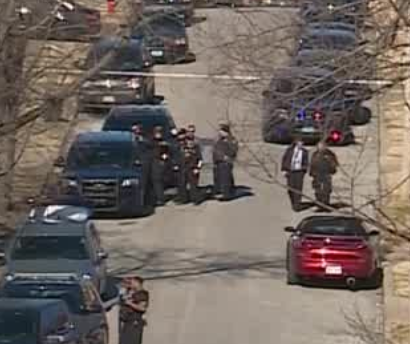 Police on the scene of the investigation photo courtesy KBMC TV

KANSAS CITY (AP) — Kansas City police say a detective shot and killed a man at a home on the city’s east side.

Spokesman Tim Hernandez said Tuesday’s confrontation began after officers were investigating a disturbance between two vehicles. When a police helicopter tracked one of the vehicles to a home, a detective approached a man sitting inside a vehicle and eventually shot him. Hernandez said the detective was “put in position where he had to discharge his firearm” but he did not provide further details.

He said the man’s hand was hanging out of the car and a handgun was found on the ground in that area.

No officers were injured.

The second vehicle involved in the initial disturbance was stopped at another location. Police say everyone involved is in custody.