MARYVILLE, Missouri - The No. 1-ranked Northwest Missouri State University Bearcats rode the scoring efforts of Trevor Hudgins and Ryan Hawkins to a 96-49 triumph over the visiting Lincoln Blue Tigers on Saturday at Bearcat Arena.

Hudgins scored a career-high 36 points as he drained 7-of-10 from three-point, while Hawkins netted 23 points and 14 rebounds. Sophomore Diego Bernard also registered a double-double with 16 points and 10 rebounds.

Northwest (22-1 overall, 12-1 MIAA) won for the 30th straight time in Bearcat Arena. It also marked the 11th straight victory over the Blue Tigers in the series. Lincoln falls to 8-14 overall and 5-8 in MIAA play.

The Bearcat three-point eruption began following an 8-8 deadlock through the game's first six minutes. Hudgins hit his first triple with 13:17 to play and Hawkins followed with his first from distance with 12:38 on the clock in the first half. Northwest would go on to make 6-of-9 three-pointers in the first half with Hudgins leading the way by making all five his triple attempts. The Bearcats led 48-28 at the break.

It took only three minutes into the second half to turn it into a 30-point bulge as Hawkins attacked the hoop for nine of Northwest's 12 points that gave the home squad a 60-30 lead. Hudgins continued to dazzle as well and he helped put one of the toppers on the victory with a four-point play with 12:15 to play in the contest. Wes Dreamer's three-pointer with 9:34 to play pushed the lead to 82-41. Dreamer's three-pointer capped a start to the second half that saw the Bearcats made seven of their first 11 three-point shots.

The Bearcats would lead by as many as 48 at 91-43 following a step-back triple from Bernard.

Northwest will hit the road for a pair of contests this week at Missouri Southern (Thursday, 7:30 p.m.) and at Pittsburg State (Saturday, 3:30 p.m.). 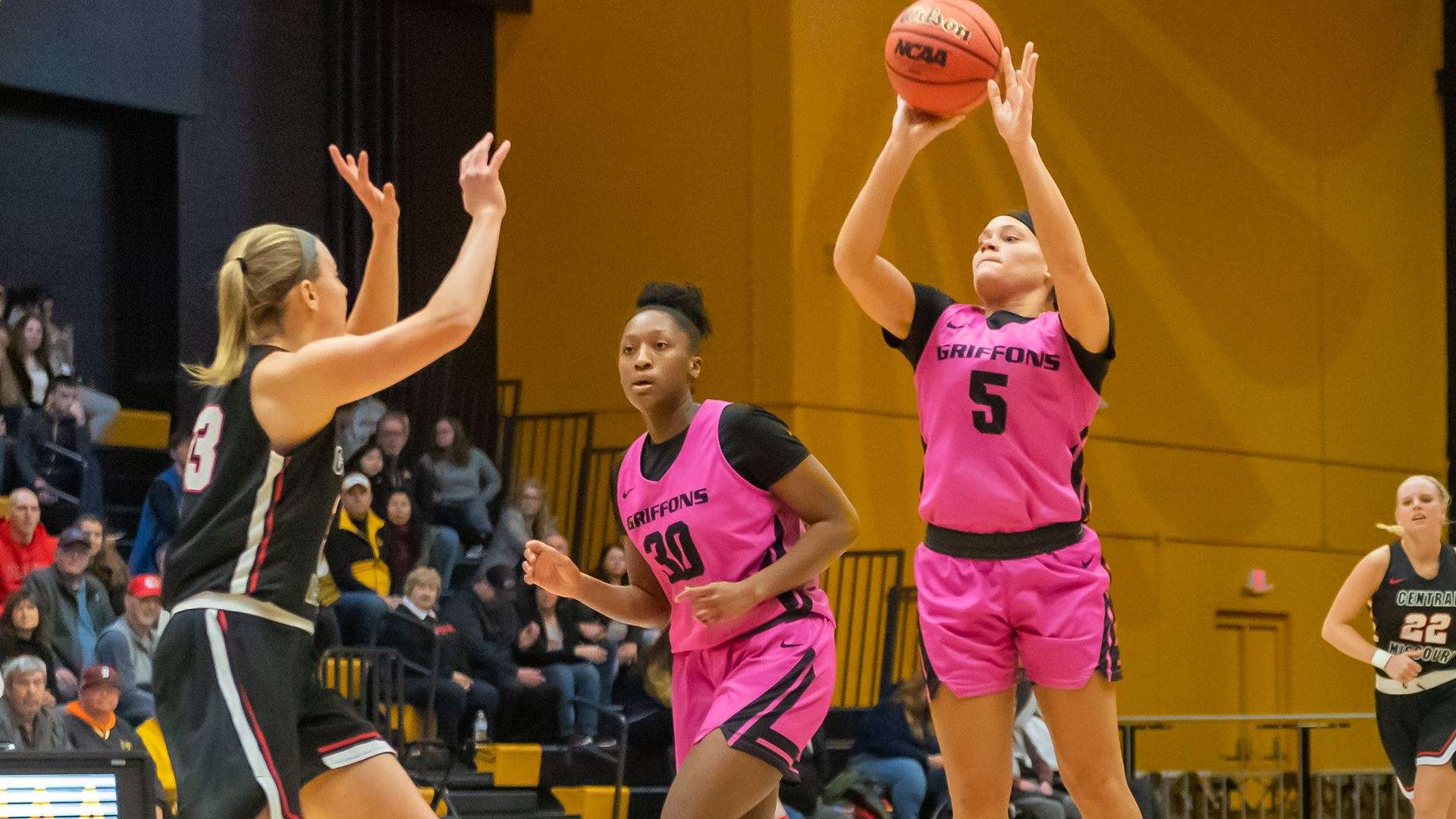 Missouri Western handed Central Missouri its first MIAA loss of the season and its first since Feb. 9 of last year. It also snapped a streak of seven straight MWSU losses to the Jennies. The win with Newman's loss on Saturday clinched the team's spot in the MIAA Women's Basketball Championships to be held March 4-8 at Municipal Auditorium in Kansas City, Missouri.

All five Griffons starters scored in double figures with Corbyn Cunningham and Chris Wilson both turning in double-doubles. The Griffons shot 53% from the field in the first quarter with UCM going 2 of 9 for 22%. The third quarter wasn't much different, where MWSU shot 46% while limiting the Jennies to 28% shooting.

- The win was the second this season for MWSU over a ranked opponent after defeating then No. 10 Fort Hays 60-57 on Jan. 23.

- Missouri Western led for 38:56 of the game, leading by as many as 20 points with two different 18-point leads.

- The Griffons outscored the Jennies by 10 in the paint and had 17 second chance points to the Jennies' nine.

- MWSU held Morgan Fleming to five points on 1 of 7 shooting. Fleming was averaging 15 points per game.

- Katrina Roenfeldt went 5 of 9 from 3-point range and led the Griffons with 17 points and five assists.