The Griffons trailed for just over seven minutes in the game and led by as many as 18 points, shooting 55.6% from the field-best against an MIAA opponent this season-and holding Fort Hays State to a season-low 30.8%. The Griffons' 75 points were the most allowed by the Tigers all season.

- The Griffons picked up their first win over a ranked opponent since early in the 2017-18 season against No. 21-ranked Central Oklahoma in the MWSU Fieldhouse.

- Missouri Western made all nine of its free throw attempts while Fort Hays State went 21 of 24 from the line.

- Simone Walker scored a career-high 21 points on 7 of 8 shooting and was 6 for 6 at the free throw line. She added sice rebounds and three assists.

- Katrina Roenfeld scored 15 of her 19 points in the second half and added nine rebounds, seven assists and four steals.

- Kacey Kennett scored Fort Hays State's first eight points and 17 of their 23 first half points, but was limited to five second half points and didn't score her 18th point until there were just five minutes remaining in the game.

The Griffons host Nebraska-Kearney (18-2, 7-2) on Saturday at 1:30 p.m. MWSU could take over third place in the MIAA standings with a win. 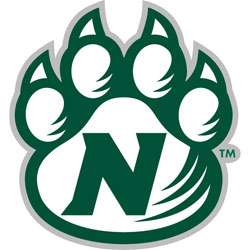 The Bearcats fell behind early losing the first quarter 24-9, and were never able to work all the way back into the game. The Bearcats struggled offensively again, as they have in all three games without leading scorer Kendey Eaton. Northwest shot only 40.7% from the field and 16.7% from behind the three-point line. The Lopers were on fire from the floor in this game shooting over 50% from the field and from behind the arc. Northwest was outrebounded by Nebraska-Kearney 40-24.

The Bearcats were led in scoring by Paityn Rau and Mallory McConkey with 14 points each. Kylie Coleman led the team in rebounds with four. Northwest limited themselves to 11 turnovers, which is less than their season average of nearly 13.

The Lopers were led by Brooke Carlson with 22 points. Carlson added 4 steals, and 13 rebounds to give her a double-double on the game. Following Carlson in scoring was Madison Dreckman with 14, Elisa Backes with 12, and Haley Simental with 10.

Northwest will be back in action against #10 Fort Hays State on Saturday at 1:30 p.m in Bearcat Arena.