James was born on March 18, 1930 in Junction City, Kansas to John and Nettie (Whitehair) Bennett. He graduated from Junction City High School in 1948, and subsequently attended both Kansas State University and the University of Kansas before enlisting in the United States Air Force in 1951. While in the Air Force, he graduated as a Second Lieutenant from pilot training in 1953. He retired from the Air Force as a Major in 1975. He married Doris L. DeLauder on June 13, 1953. They had four children: Shelley (George) Kirschner, St. Joseph, Mo; Gregory (Nicole Johnson,) Santa Fe, NM; and Brice (Karin Beij,) Holderness, NH.

Throughout his Air Force career, he was fortunate to have his wonderful family with him except for 18 months in SE Asia during the Viet Nam War. Before moving to Colorado in 1999, the family lived 39 years in NH. The family resided in California, Germany, Kansas, and Louisiana prior to NH.

Survivors include his three children: three grandsons: Keegan Bennett, Cody Kirschner, and Eli Ziaiefar; and great granddaughter, Kayla Melanson; as well as many nieces and nephews. A private family service will be held at a later date.

Memorials in lieu of flowers are requested to the Cameron Veterans Home. 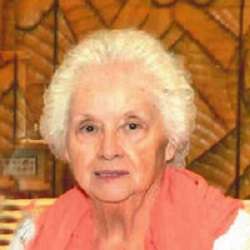 She was born May 13, 1933 in Smithville, MO. She worked at Big Smith and Lakeland Industries. She enjoyed playing bingo, and taking care of all the grandkids, and she was a member of the Cornerstone Church of God.

Funeral services: 2:00 pm, Wednesday, January 22, 2020 at Rupp Funeral Home, Steve Shelley officiating. The family will receive friends from 6 to 8 pm Tuesday at the Rupp Funeral Home. The Interment will be at the Fillmore Cemetery. Memorials are requested to Mosaic Hospice.