She was born October 22, 1926 in St. Joseph, MO to Mr. and Mrs. Henry Bartels. She married Joseph Purtek on June 6, 1950. Minnie enjoyed knitting, crocheting, quilting, having made many teddy bears, hats and scarves. She also enjoyed gardening and flowers. She was a member of Central Christian Church.

Funeral services will be 2:00 pm, Thursday, January 16, 2020 at Rupp Funeral Home, Pete Smith, officiating, The family will receive friends from 12:00 PM to 2:00 PM on Thursday at the Rupp Funeral Home. The Interment will be at the Memorial Park Cemetery . Memorials are requested to the The Crossing Outreach, Central Christian Church, or American Cancer Society. 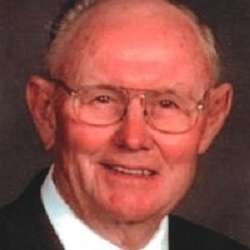 Sidney Charles Hargis, 95, of Highland, KS, passed away Monday, January 13, 2020, at the Hiawatha Community Hospital. He was born July 5, 1924, in Endicott, NE, the son of James Jackson Hargis and Cora Margaret Crouse Hargis.

Sidney graduated from Highland High School in 1942, attended Highland College and Kansas State University. He served in the United States Army Air Corps during World War II as a co-pilot on a B-17 Flying Fortress, flying missions over Europe.

Sidney and Wilma Jeanne Peabody were married June 23, 1946, at the Baptist Church in Highland, KS. They celebrated 73 years of marriage.Sidney and Jeanne lived and farmed northwest of Highland from 1946 to 1986, at which time they retired to their home in Highland. In 2013 they received the Kansas Bankers Association Soil Conservation Award for conservation work done on the family farm. He also was a substitute rural mail carrier and delivered meals to shutins from the Highland Senior Citizens Center.

His memorial service will be 11:00 a.m., January 16, 2020, at Highland Christian Church, Pastor Tom Carter officiating. Burial will be in the Highland Cemetery following the service.

Visitation will be at 10:00 a.m. at the church prior to the service.

Memorial contributions may be made to the Highland Christian Church.