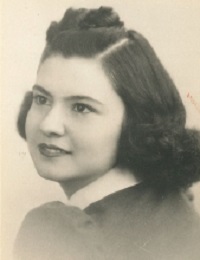 Born March 31, 1922 in St. Joseph, Missouri to Robert and Anna (Gordon) Smolly, she was a lifelong resident of St. Joseph. She was a graduate of Central High School. Miss Smolly had been employed at United Department Store, Smolly’s Bakery and as an accounting clerk for KQTV for 29 years, retiring in 1986. She was a member of B’Nai Sholem Temple and the Sisterhood of the Temple.

She was preceded in death by her parents and two brothers, Sherman Smolly and Gerald Smolly. (Survivors:) her nephew John MacIntire and his daughter, Kate; her niece Robin Kennedy and her sons, Daniel and Adam; and many cousins and friends She was grateful for the love and friendship of Robert and (the late) Carol Housh, Kathy Sadoun and the children of Marvin and Marilyn Nelson.

The family will receive friends from 9:00 am - 11:00 am on Saturday at the Rupp Funeral Home, with a short Celebration of George's life to start at 11:00 am Saturday, December 7, 2019. He will be cremated under the care and direction of the Rupp Funeral Home. Memorials are requested to the Charity of Donor's Choice. Online condolence and obituary at www.ruppfuneral.com