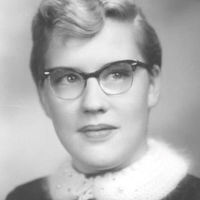 She was born September 20, 1937 in Chillicothe, Missouri, daughter of the late Lola M. and Theodore R. Austin Sr. She moved with her family to St Joseph in 1942, and attended South Park Elementary, and she was a 1955 graduate from Lafayette High School. She worked as a cashier for many years at Green Hills Grocery and the Trading Post Grocery on King Hill Avenue. She began working as a custodian at Benton High School in 1985, retiring in 1999 from the school district. She had many dear lifelong friends in South St Joe, and she was a naturally talented musician, who had a sentimental weakness for children and dogs.

The family will receive friends from 1-2 pm Tuesday, with funeral services at 2:00 pm Tuesday at the Rupp Funeral Home, Rev. Jim Barnett officiating. The interment will be at the Memorial Park Cemetery.