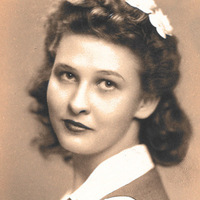 Mary Lou Nigus, 94, of rural Robinson, died peacefully early Thursday morning, November 21, 2019, at Maple Heights Nursing Home in Hiawatha where she had been a resident for nearly 6 years.

Mary Lou was born at Stella, Nebraska, October 22, 1925, the oldest child of four children born to George “Deaver” and Gladys Young Lambert. She lived with her family at Stella for a number of years before they moved to Claytonville where she attended Willis High School and graduated. Mary Lou worked at the Horton Garment Factory for four years, also at the Robinson Middle School in the cafeteria. She enjoyed being able to be at home with family, gardening, just being outdoors. She also enjoyed bird watching. Mary Lou was of the generation and by growing up on the farm of being creative and doing with what is available to work with. She enjoyed volunteering with the BCDS Thrift Shop for many years. Mary Lou was a fun, loving, and very outgoing person, and enjoyed whatever she was doing. She married Keith Raymond “Pete” Nigus, July 15, 1945, at Marysville, KS. They lived nearly all of their married life on the Lambert farm southeast of Robinson. They spent many years enjoying each others’ company traveling before he died May 5, 1998.

She was also preceded in death by her parents, her son Mike August 18, 2017, two brothers Floyd and James Lambert.

Private family inurnment will take place at Claytonville Cemetery, south of Hiawatha. Memorial contributions are suggested to BCDS (Brown County Developmental Services, which may be sent in care of the Chapel Oaks Funeral Home, 124 S 7th St., Hiawatha, who is assisting the family.