OKLAHOMA CITY (AP) — A 70-year-old northwest Oklahoma man has pleaded guilty to trying to hire his business partner in Kansas to kill a man in Oklahoma City. Court records show Vernon Wayne Brock of Alva signed a plea agreement Wednesday admitting he tried to "conduct a murder for hire" plot to kill the unidentified man.

The original affidavit stated that Brock and the business partner owned 17 vape shops in Kansas, Missouri and Oklahoma.

As part of the plea agreement, prosecutors agreed not to pursue further charges in the case.

FBI agents arrested Brock on the afternoon of April 3, with the assistance of the Woods County Sheriff’s Office, after Brock delivered a $5,000 check to the individual from Kansas at a café in Harper, Kansas. Brock appeared Thursday afternoon for an initial appearance before United States Magistrate Judge Shon T. Erwin. If found guilty of murder-for-hire, Brock faces a potential penalty of ten years in prison, a fine of $250,000, and three years of supervised release. 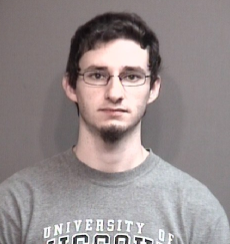 COLUMBIA, Mo. (AP) — A prosecutor said a University of Missouri student is the "prime suspect" in the disappearance of his Chinese wife, and he played audio in court of the young husband saying he wanted a divorce "the sooner the better."

Joseph Elledge is a "jealous, controlling, manipulative psychopath," Boone County Chief Prosecutor Dan Knight said during a hearing Wednesday in which he argued that Elledge should remain in jail on his current $500,000 bond on a child abuse charge, the Columbia Missourian reported. The judge didn't rule on the bond matter at the hearing.

Elledge hasn't been charged in the disappearance of his 28-year-old wife of two years, Mengqi Ji Elledge, who was reported missing four weeks ago and with whom he shares a 1-year-old daughter. But Knight described him as the prime suspect in her disappearance and he played four audio recordings of the couple arguing.

In the recordings, Joseph Elledge can be heard saying "I don't like being with you," ''I'm eager to end it" and "I will bury the earth under you." Mengqi Ji Elledge can also be heard arguing with her husband, who raised his voice several times. At one point, he told her, "I know you want me to hit you," and, "This, it's not abusive."

Joseph Elledge took a long drive through unfamiliar remote areas of central Missouri before reporting his wife missing, a Columbia police detective wrote in the probable cause affidavit filed in the child abuse case. The abuse allegedly occurred in February and the girl's mother wanted to notify the police at the time, but she gave Elledge another chance after he promised he would never do it again, the detective wrote. She sent another person a photo of the bruising, however, and officers examining the mother's iPad found photos and videos of the bruising.

The defense, meanwhile, argued that Joseph Elledge's bond should be reduced, saying that Mengqi Ji Elledge had exchanged sexually explicit messages with another person. Little else was said during the hearing about the messages. A police detective clarified that officers hadn't yet gone through Mengqi Ji's phone, which police found along with her wallet, laptop and passport in the couple's apartment after her disappearance.

Joseph Elledge no longer has custody of his daughter. During Wednesday's hearing, his mother, Jean Elledge, testified that the dispute over custody of the child resulted in an arrangement granting equal custody to her maternal and paternal grandparents. Both sets of grandparents agreed on a no-contact order between Joseph Elledge and the child.

Police said Mengqi Ji Elledge's family has flown to Columbia so they can be present as the investigation unfolds. Mengqi Elledge received a master's degree in mechanical and aerospace engineering from the University of Missouri in December 2014. She previously attended the East China University of Science and Technology in Shanghai.