Webb was responsible for all three Griffon takeaways in the 46-21 victory. He pulled down two interceptions along with forcing and recovering a fumble. The junior from Excelsior Springs, Missouri, forced and recovered a fumble on Washburn's first drive of the game that led to a Griffon touchdown. He ended the Ichabods' third drive of the game with an interception that also led to a touchdown for Missouri Western as did his second pick of the game in the second quarter. 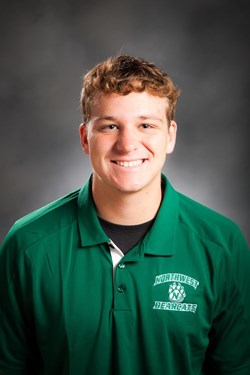 Northwest Missouri State University junior kicker Parker Sampson has been named the MIAA's football special teams player of the week presented by Mammoth Turf. It marks the fifth consecutive week that the Bearcat football team has had a player earn one of the league's weekly honors.

Sampson (Kansas City, Missouri) was a perfect 4-for-4 on field goals, including a career-long 53-yarder in a 34-23 win at Emporia State. The 53-yarder is the longest made field goal this season in the MIAA. It also ties for the second-longest field goal made in Bearcat football history. Pat Johnson set the Northwest record with a 54-yard field goal vs. Washburn (Sept. 7, 1985). Shawn Geraghty made a 53-yard field goal vs. William Jewell (Sept. 17, 1977).

Sampson made field goals of 35, 53, 41 and 27 yards at Welch Stadium on Saturday. Sampson accounted for the final nine points in the game and built Northwests lead from 25-23 to 34-23 in the final 15:46 of game play at Emporia State. Sampson also added two extra points to tally 14 points in the game. He kicked off eight times and had four touchbacks.

Sampson has scored a team-high 54 points and ranks tied for No. 5 in the nation in points scored. Sampson is 8-of-11 on field goals and is 30-of-31 in extra points. Sampson has made five consecutive field goals entering this week's game in Arrowhead against Pittsburg State.

The Bearcats (5-0 overall) will take on Pittsburg State (5-0 overall) Saturday at noon at Arrowhead Stadium in Kansas City, Missouri.