KANSAS CITY, Kan. (AP) -Police announced Wednesday that a woman's body has been found in Arkansas after police fatally shot her estranged rifle-toting husband the day before near a popular shopping area in Kansas City, Kansas.

The body of 49-year-old Sylvia Ussery-Pearson was found Tuesday night in northwest Arkansas' Benton County, police said during a news conference in Overland Park, Kansas, where she was from. The discovery was made hours after 51-year-old Charles Pearson, a 21-year veteran Army Ranger who had completed two combat tours in Iraq, walked into a Country Inn & Suites and told the general manager that he killed his wife. Pearson said he was armed and heading to the nearby Legends Outlet shopping district. Police in Kansas City, Kansas, said that when law enforcement confronted Pearson at a nearby intersection, he fired several shots at officers, who returned fire and killed him. Ussery-Pearson had been missing since Monday after leaving her home with her husband, who lived in nearby Lenexa, Kansas. Overland Park Police Chief Frank R. Donchez Jr. said her family filed a missing person report later that day and contacted her husband on Tuesday. He agreed to be interviewed and his home and car were searched. Donchez said Pearson later called family and friends and said he was suicidal before going to the shopping area, where the shooting happened. A note found in a Lenexa residence later led law enforcement to his wife's body. Donchez said her death is believed to be a homicide but the cause hasn't been released. He said no other suspects are being sought. He said the couple had been estranged since February. Cass County, Missouri, officials on Tuesday searched a patch of land outside of Harrisonville that belonged to U.S. Rep. Vicky Hartzler. Police said the reason for the search was that Ussery-Pearson's phone had pinged on Hartzler's land about 40 miles (64.37 kilometers) south of Kansas City. Hartzler's spokesman, Steve Walsh, said Wednesday the Hartzlers didn't know the missing woman or Pearson. Johnson County District Court online records show Charles Pearson was charged last year with misdemeanor criminal damage to property after an incident in Lenexa on Oct. 8, 2018, that referenced a woman named Sylvia Pearson, according to The Kansas City Star. Charles Pearson, who allegedly broke a mirror, was booked into the Johnson County jail and released the next day after posting bond. The court records indicate a diversion agreement in the case was signed Nov. 28, 2018. Donchez said he didn't know whether Pearson had PTSD from his military service. "We need to do more for our veterans that return from combat," he said. "This may or may not be an unfortunate circumstance of his service."

KANSAS CITY, Kan. (AP) — Police have identified a man they fatally shot near a popular Kansas City-area shopping area after he said he had killed his wife.

Police on Wednesday said 51-year-old Charles Pearson, of nearby Johnson County, Kansas, was the man who walked into a Country Inn & Suites Tuesday and told the general manager he killed his wife.

He said he was armed and heading to the nearby Legends Outlet shopping district. Kansas City, Kansas, police spokesman Jonathon Westbrook said when law enforcement confronted Pearson at a nearby intersection, he fired several shots at officers, who returned fire and killed him.

Overland Park police said Tuesday they were searching for 49-year-old Sylvia Ussery-Pearson, who hasn't been seen since leaving her home Monday. Ussery-Pearson is listed in 2018 property records as Pearson's wife.

KANSAS CITY (AP) —Kansas City, Kansas, police shot and killed a man on Tuesday who told a hotel manager that he had killed his wife and was heading to a popular shopping and restaurant area.

The "very angry and distraught" man entered the Country Inn & Suites near the Legends Outlet shopping area said he had killed his wife, said Jacob Honeycutt, general manager of the business.

The man was not armed when he entered the Inn, said Honeycutt, who tried to follow the suspect but couldn't catch him before he got into a car and sped away, driving through stop signs before the confrontation with police.

Officer Jonathan Westbrook told The Kansas City Star the gunman was waiting at an intersection for police to arrive.

"We were able to locate him so quickly because he was stationary," Westbrook said. "Given the information that he was heavily armed and dangerous, our officers were very tactical in how we approached the subject."

The man raised an assault-style rifle at officers, who tried to convince him to put it down, Westbrook said.

Eventually the man fired several shots at the officers and they fired back, he said.

The number of rounds fired by the unidentified gunman and officers was not immediately known. No officers or bystanders were injured.

Law enforcement authorities were investigating to determine if the man had committed any earlier crimes, Westbrook said.

Honeycutt said he and a front desk manager were the only people in the front desk area of Inn when the man arrived. He praised police for their quick response to the situation.

"I was worried about the safety of my guests and employees but also all the people in the rest of the shopping area," he said "We wanted to try and stop them but unfortunately we couldn't so we got ahold of the police as quickly as possible."

The man was stopped before he made it into the Legends, which is full of stores and restaurants in a rapidly developing area in western Kansas City, Kansas. The County Inn & Suites is on a road that surrounds the shopping area, located near other businesses such as Cerner and Cabela's and the stadium for the Sporting KC soccer team.

All the businesses were reopened and operating normally about two hours after the man was shot.

This story has been corrected to show that the hotel manager's first name is Jacob instead of Jason, that employees were the only ones in the entrance of the inn, and that the name of the nearby business is Cabela's instead of Cabella's.

KANSAS CITY, Kan. (AP) — Kansas City, Kansas police say officers shot and killed a man who was armed with an assault rifle near a popular shopping and dining area.

Officer Jonathan Westbook said officers were called to the Country Inn and Suites near the Legends Outlet shopping district after a manager reported a heavily armed man came into the business and said he had killed his wife. The man then left the inn.

Westbrook said the man was armed with an assault rifle when officers found him. He says the man fired at police, they shot and killed him. Westbrook says police are working to determine whether the man had killed his wife. No police officers were injured. Police say the suspect didn't make it into the Legends businesses. 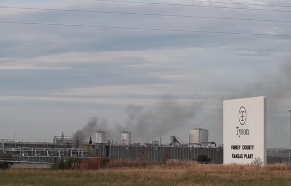 In a media release, Marshall said, "I will personally thank the fire crews in both Garden City and Holcomb, as well as all first responders who assisted with the fire. I am thankful no one was hurt, and will continue to keep first responders and Tyson employees on the forefront of my mind as rebuilding moves forward."

Cattle producers are concerned a fire at a Tyson meat processing plant in Holcomb could disrupt already strained processing operations. The plant is closed indefinitely and Tyson has said it will reopen the plant but the timeline will depend on the extent of the damage. Industry experts say the Holcomb plant processes about 6,000 cattle a day — about 6% of all the cattle processed in the U.S. Finney County commissioner

Larry Jones, a partner at J&O Cattle Co., said meat packing plants are already running at capacity because a record number of cattle are going to market. In the first day of trading since the fire, cattle futures on Monday dropped $3 per hundred pounds, the maximum fluctuation allowed for a single day. -The AP contributed to this report.